Quarantine Food Diaries Soup Season, Bone Broth, why we all need it 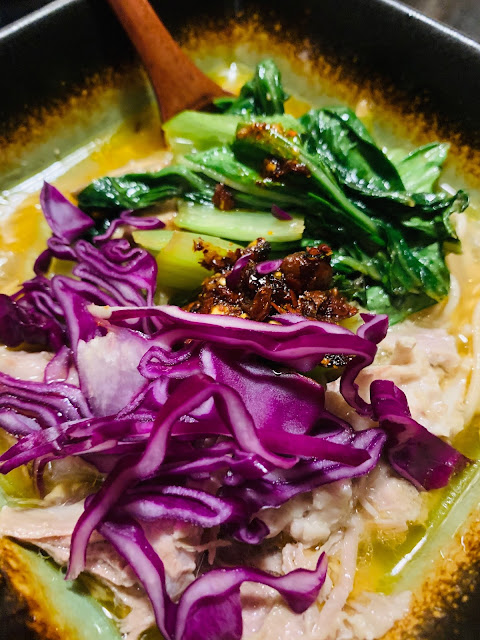 Bone broth is everywhere, the newest trend, everything from bone broth stocks to bone broth juices, supplemental bone broth powders and bone broth in capsules, but what is all the rage?

I sat pondering this clear broth and understood it was as old as time just repackaged and renamed for better marketing, so that all those who would could cash in on the new buzz word of our consumer culture.

Your mother's chicken soup is bone broth. It's that simple. Any soup made with the bones and connective tissue and fat simmered over two to three hours is bone broth.

What's the fuss all about? Here's a few concise facts about what bone broth does and why it is said to support digestion, boost the immune system, act as a probiotic restoring the gut and reverse signs of aging like collagen loss and inflammatory responses.

So whatever your age, or gender, physical state bone broth has key roles to play as the fountain of youth from skin to gut to joints to immunity.
Make sure you are giving yourself a broth made from humanely pasture raised animals as we carry the energy of that which we eat into our own cells, so making a broth from a chicken that hasn't run free and has been pumped with antibiotics and growth hormones will impart these traumas to you as well.
I make a bone broth and like to add the umami to it, a few different ways today I'll give you one to play with.
To increase the trace mineral content to your broth add ginger, and scallions, an onion and at the end you can saute' mushrooms, bok choy to give it a Ramen twist as I did. Just remember, good old chicken soup is also a bone broth!!
Ramen Broth
Ramen Broth
Ramen Noodles and Toppings
Ramen Broth
Making Soy or Amino Ramen
Posted by Artemisia at 6:34 AM